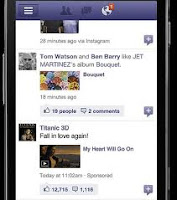 Nice plug for our company, Targeted Social, in this Forbes story.  The results from the first Facebook ad campaigns on mobile devices have been extremely encouraging.  Our first campaign featuring a Unilever promotion was no exception.  CTRs were almost 2%, a 2200% increase over the same campaign on desk top.

The Forbes reporter focused on another layer of data from our campaign and a few others - performance of ads on IOS versus Android devises.  And the results are compelling.  Android users clicked on ads 28%-109% more than IOS users.
Posted by Jan Renner at 11:45 AM