Will We Scroll More Than We Surf?

The 30-second TV commercial is entering it's sixth decade as the most lucrative, ubiquitous and durable advertising format in history.  I spent the early years of my career selling TV ads and a pretty significant % of all TV ad time sold in US these days in overseen by friends of mine.  I hope the business thrives forever.  And as long as watching TV programming with ads included remains something we spend hours a day doing, it will.

Scalable, tolerable (and ultimately effective) ad formats tied to massive media behavior are rare.  Google's search business (roughly $50 billion this year) is the only other one that comes close in scale to TV advertising in the past 60 years.

A third is here and it is quite possible you are seeing it in action as you read this post - feed-based content, interspersed with ads, that we scroll through on our phones  A recent piece in Re-Code highlights the Feed Mindset


Today’s consumer lives in their feed: Scrolling and scrolling ... and scrolling ... through an infinite amount of content with the flick of the thumb. This new behavior, unheard of four or five years ago, is synonymous now with a modern internet built around the content feed.

And an article in The Atlantic aptly titled "How Mobile Today is Like TV Six Decades Ago" highlights how Mobile's current advertising growth arc is similar to TV's in it formative years.  TV, arguably the most most pervasive and culturally transforming media platform, dwarfing every other media format that came before it and after, finally has a real rival. The channel surfer is becoming the feed scroller.


When the TV advertising riches started flowing, 3 networks shared the spoils.  With mobile, it is two - Facebook and Google.  Facebook was the primary instigator and now beneficiary of our new scrolling habit. The ads in FB's mobile feed are the main revenue driver of the company now, quickly becoming as significant as search ads are to Google's bottom line.

But niche, mobile-first publishers like us are also benefiting as we package our unique content for the scrollers and see rising CPMs.  Digital dimes are becoming quarters, and even dollars. 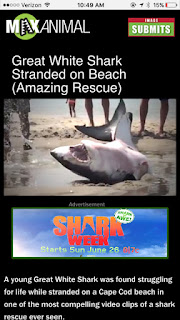 And when the ads are presented seamlessly (natively) and are contextually relevant, they get nearly universal  positive (or at least tolerable) user feedback.

It certainly feels like a powerful new publishing model.
Posted by Jan Renner at 9:30 AM