3 Million Views in 18 Hours: The Thrill of a Viral Video 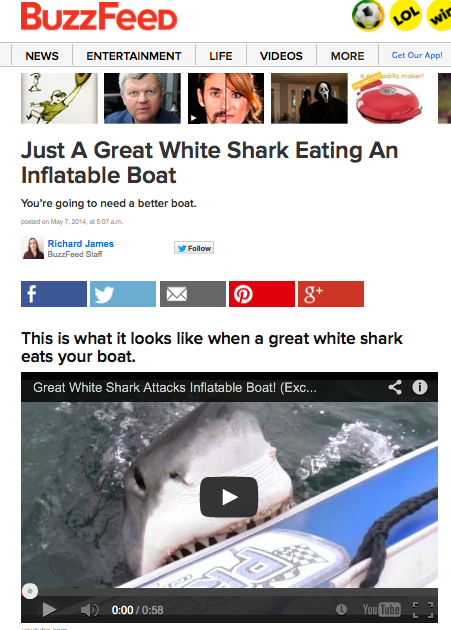 Last month one of our videos "went viral."

It started with the comments on our YouTube channel.  Dozens every few minutes, some snarky, some trollish, some genuinely passionate, others asking questions or wanting more info.  At around the same time, the shares across YT, FB and Twitter started growing quickly.  Then the views started piling up at a startling pace - thousands per minute, three million in less than two days.

Within a few hours, old guard media outlets like CNN and ABC, along with the snappy upstarts like BuzzzFeed, were featuring the video, and before long there were very few people I spoke to that HADN'T seen "Great White Attacks Inflatable Boat."

YouTube was the basecamp for this heady ride, and was where most of the viewing occured. However, our website and FB page saw a significant lift in activity.  And, more importantly our niche wild animal brand, MaxAnimal, suddenly had thousands of new subscribers, and the attention of new business partners and advertisers.

Just as shocking as the explosion in views, was how small the ad revenue YouTube delivered.  (I kid our friends at YouTube.)  But, it's impossible to build an online video business without YouTube, and the value their platform delivered to our brand could not be counted only in ad revenue.

Can we recreate the magic?  There is little science to media virality, but even an occasional home run like this can help us build our subscriber/fan base which makes us less dependent on the viral winds.  With the increased subscriber base, all our videos are adding a steady flow of new views every day, not the least being the Shark video which is now approaching 5 million views.

As a YouTube exec outlined during a recent talk, a fan base trumps an audience:


An Audience tunes in when their told to, a fan base chooses when and what to watch.

An Audience changes the channel when the show is over

We are also bullish about the opportunity for niche channels to prosper in a new micro network world where subscribers are subscribing to the content they want to see.  As one of the backers of Maker Studios wrote on his blog recently:


I have been saying privately for years now that I believe online video will evolve into fragmented distribution and vertical production. By “vertical production” I meant that many online video production companies will have a strong vertical focus that will help them win the battle to sign up talent, build stronger & more loyal audiences and align with stronger advertiser relationships because they serve more endemic audiences