ESPN, arguably the most valuable TV programming franchise in the world, is making all their programming available online, live, to authenticated Time Warner Cable subscribers.  Seems like a huge story, but much like the entire "TV Everywhere" initiative introduced by the cable industry nearly 2 years ago, the actual service is shrouded in quiet - like the stealth launch of a new product that all stakeholders are unsure about, as it represents enormous disruption for their industry.

I could find no mention of the new offering in any Time Warner Cable marketing materials or on the customer web site.  There was some coverage in the trade media, but quite frankly, I expected to see much more.   I initially found out about it on a blog, which took me to this ESPN/Time Warner Cable co-branded web site: 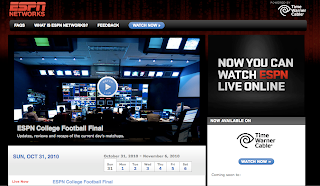 After entering my account number and customer code, within seconds I was watching Sports Center and a bit later, a college football game - basically, a live feed of the cable channel, without commercials, although I am sure that will change quickly.

The problem with TV Everywhere has been the lack of compelling content.  Up until now, the most prominent programmers to participate - Time Warner's TNT, TBS and HBO - have only made limited content available; and very little promotion has resulted in minimal consumer adoption.

Some toes in the water, but no real commitment.  And as a result, everyone had heard about TV Everywhere, but very few have actually experienced it.

(Comcast's TV Everywhere initiative features a somewhat broader line up of content but has struggled with the additional issue of a poorly designed authentication process, frustrating the customers that tried to sign on.)

Not surprising, it is ESPN that is the first to make such a dramatic move.  They are consistently among the most innovative and technologically nimble of all the media brands.  Yet both ESPN and Time Warner Cable have significant risks to consider.   ESPN's subscriber fees are the highest in the business, bringing the company billions in revenue from their cable, satellite and telco distribution partners.  And for the distributors, live sports is among the most valuable and highest rated programming, justifying in large part why consumers are willing to fork over so much money every month for a bundled package of programming options that includes channels they never watch.

Yet as more and more consumers are connecting their TV's to the web through one means or another, and they start to see some of their favorite programs outside the realm of the set top box, the whole business model of the bundle weakens.   A column in Tech Crunch earlier in the year addressed the looming bundle versus a lá carte challenge facing the cable companies:

"... on the Internet the more empowered consumer has become comfortable with picking and choosing the content for which they pay. Thus the success of iTunes over the Rhapsody model. So the really interesting business question which TV Everywhere raises is whether the old media model of bundling all-you-can-eat content in a single monthly price can work in the digital age of this empowered consumer.  Perhaps, in parallel with TV Everywhere, cable companies would be wise to also offer the option of paying for online video content on an a lá carte basis..."

With so many big guns (Google, Apple, Amazon) and smaller ones (Netflix, Hulu) aiming at them with lá carte options for consumers, the cable industry will need to respond quickly.
Posted by Jan Renner at 9:09 AM