The entrepreneurial energy of the advertising and media industry never ceases to amaze me.  And while successful new ad-supported media businesses are often driven by a clever new content initiative that leverages an emerging technology platform (MTV, Google, Facebook), many times the business has nothing to do with content and is simply based on the age-old principle of the land grab - identify a valuable location, muscle your way in, stake your claim, scale.

The outdoor advertising industry followed this principle, creating enormous fortunes for entrepreneurs and highly profitable businesses for major media companies such as Clear Channel and CBS, who have consolidated thousands of properties.  These businesses generate most of their revenue from selling ads on signs of every conceivable size in every conceivable location from highways, roof tops and building walls to trains, buses, sporting stadiums, malls and bathrooms.

It seems every day a new "land grab" advertising idea comes to market, testing the appetite of the marketing community to place an ad message into yet another nook and cranny of our lives. (And surprising and exasperating all of us with the idea that there are still places in the physical realm that haven't been claimed.) 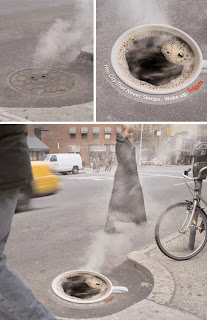 The Folgers ad above uses the "Land Grab" metaphor quite literally.

But it's also the digital realm where entrepreneurs are staking claims, identifying highly trafficked areas that no one previously considered as an environment for advertising.  The latest: online bank statements where ads and promotions are linked to a particular transaction. So, underneath a transaction for a department store might be a discount offer from a rival store. 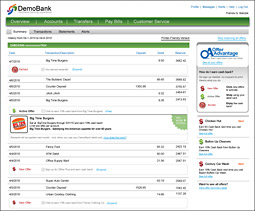 According to a recent article in Ad Age, marquee advertisers such as Macy's and McDonald's have signed on for test campaigns, giving the business some initial credibility.
As long as advertisers continue to be as entrepreneurial and experimental as the creators of these new businesses, the surprises will never stop coming.
Posted by Jan Renner at 3:25 PM