Ad Spending Is Completely Out Of Whack

Ad Age just published their annual ad spending issue featuring all sorts of charts, graphs and lists showing where advertising dollars are spent and who is spending them. Here is where the ad dollars fell by media category:

More than half the total spending went to Broadcast TV and Magazines.  Note Internet spending, third from last, barely beating out Radio. (Would still be third from last with search included, but almost tied with newspaper.)

The following chart is from Forester and shows where people are actually spending their time: 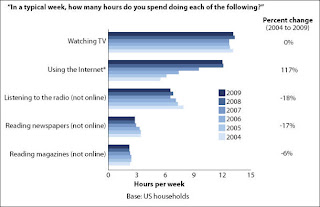 We all know that ad spending is not properly aligned with media consumption.  But to this extent?  People spend almost as much time on the Internet as they do watching Television, yet the Internet garners only 14% of TV ad spending.

While much of the gap is a result of major brand advertisers poorly allocating their media budgets, another key factor is the dramatic price difference between the two platforms.  It's significantly cheaper to advertise online.

Jeff Zucker's famous warning that the Internet would "trade analog dollars for digital pennies" is clearly becoming a reality.  It seems quite possible that as advertisers move more of their ad budgets online, their overall ad spend will decline significantly.
Posted by Jan Renner at 6:00 PM