The consumer and trade press (driven by Facebook's PR machine) are abuzz about FB's extraordinary video growth.  With such an enormous and engaged user base, they can focus and then dominate whatever new sector of the market they want, and quickly.  (It was just a short while ago they were being criticized for lacking a mobile strategy.)

What initially blew me and my partners away about YouTube was the ability it provided talented content creators (albeit with a lot of practice and work) to deliver network television size audiences in a matter of hours.  And how it was scaling at a mind-blowing rate, feeding itself with better and better content, driving more and more users.  (100 hundred hours of new content is uploaded every minute.)

But we are now seeing equally impressive viewing #s on Facebook, and we have a clear view into their focus and determination to dominate this market. 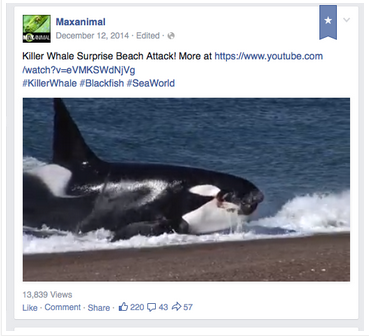 Because we have a relatively small fan base on FB for this new channel, these posts in the past would generate a few hundred video views, at most.  But this post generated 14,000 views in a few hours.  FB is clearly favoring - not just favoring, but smothering with love - posts that use their video player.

It is not entirely clear what the value of these views are, other than leading to some additional likes and comments on Facebook.  (And many of the views were muted auto-play.)  We would much rather see the views on YT or our website, where we can monetize, link to other videos, showcase an expanding audience, and take advantage of other "channel" effects.

But such enormous scale can't be ignored and we plan to continue experimenting, and look forward to Facebook providing media companies like ours a strategic plan to manage our video audience on their platform.
Posted by Jan Renner at 7:51 AM