Get A Job In Mobile

As this year winds down it appears two of the media sectors I work in - digital video distribution and social - are poised for another year of enormous growth as they further define their business models and disrupt traditional media (television) and maturing digital media (search and display) more and more profoundly.

Watching our teen's media habits is illustrative of our near and long term media media future. Half or more of my 13-year-old's time online is spent on Facebook and other than live airings of Glee on the family television, all of her video consumption is online, split evenly between Netflix, Hulu and YouTube on the Family iMac or iPad.

But it's the smart phone (which of course is already a major hub of social media and fast becoming an important video distribution channel) that I think will be seen as the most disruptive force in another year of major media disruption.

Making grand predictions from small samples of personal experience is never a good thing, and a bad habit of mine, but a recent business trip to Washington DC showed me how the deep, omnipresent connection to and dependence on our smart phone is only getting more extreme.

For the first time I paid a taxi fare using Square, a mobile payment platform created by one of the founders of Twitter.  Here is my driver swiping my credit car through the small Square module plugged into the top of his iPhone. 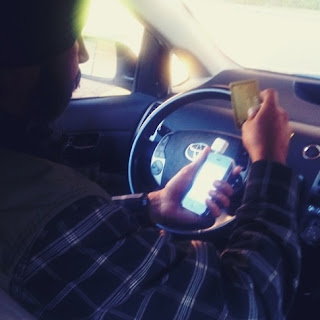 After processing the payment through the Square app, a receipt was sent to my phone via a text message instantaneously streamlining a ridiculously clunky payment process, saving the driver and me valuable time, and allowing the driver to cut his credit card payments in half. (As he told me, the taxi company exercises a 4-5% fee for credit card transactions, while Square charges only 2 1/2%.

In between meetings, I stopped at Starbucks where 3 customers in front of me paid using the Starbucks mobile payment app - a process as simple as driving through a toll using Easy Pass.  Less than 6 months ago a friend seemed to be flexing his early adopter muscles when he paid for our Lattes using this app and now it has moved well into the next stage of consumer adoption. 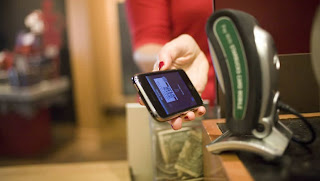 In a recent column in the Times, Nick Bilton predicts that our Smart phones soon will be attached to our bodies in some form.


The smart phone is going to be the hub for our information sharing and gathering.  Think of it as a force field that will engulf us wherever we are, transmitting power and Internet access to sensors and screens that are tacked to our clothing.

It beckons a new field called "wearable computing" that execs at Google, Apple and perhaps the next great tech company are studying, ensuring that our current devices look as relevant as an 8-Track cassette player in a few years.
Posted by Jan Renner at 8:27 AM