Cutting The Cord For A Week

My wife is in the middle of a 15-day "cleanse" - no caffeine, alcohol, meats or starches - all things I couldn't give up for more than half a day.  But in the spirit of cutting things out of our life that we are addicted to, I spent the last week seeing if I could live without cable television, "cutting the cord", so to speak.  Of course I still watched TV, just via the web through a $250 Google TV Logitech box and keyboard.

Cord cutting is the media topic du jour.  Although the term cord cutting couldn't be more inaccurate, as the cord into the home, powering so many web-based TV viewing alternatives, is more important than ever.

As you can see on my latest cable bill, I pay nearly $80 for programming and $30 for broadband service. (Including phone service, the odd VOD movie rental and an utterly bogus sounding list of taxes and fees, my bill adds up to $165 per month.) 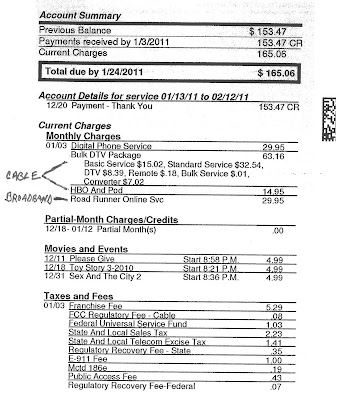 It's the $80-per month cable programming subscription that I cut out for the week, relying on the $30 broadband subscription to bring the web, including custom applications from Netflix, Amazon and YouTube, to my TV. (The multi-billion $ question: will/can the cable companies move to a usage model like every other utility, enabling them to raise the price of broadband significantly for heavy users.)

Connecting the Logitech box to the TV and accessing our Wi-Fi network was as easy as setting up our Wii game console. It is designed to be a central home video entertainment hub, enabling users to manage their TV, Web and personal digital media library from one device.  However, I kept it disconnected from my cable box for the week.

My purpose here is not to provide a review of Google TV (many reviews have been written by people more qualified than me) or make a prediction on the future of Google TV and other products like it, but to question why the $160 billion television subscription and advertising business continues to chug along, growing every year,  yet maintaining outdated practices (the Upfront Ad Market) and pricing strategies (Bundling) while the Internet disrupts, upends and in some instances completely dismantles other sectors of the media  industry.


The Internet has gone through fits and starts – in particular the dot com crash of 2000 disillusioned many – but every year we see it transform industries that previously sauntered along blissfully denying its existence.  Already transformed: music, news, advertising, telecom. Being transformed: finance, commerce, TV & movies, real estate, politics & government. Soon to be transformed (among many others): health care, education, energy.

The modern economy runs primarily on information, and the Internet is by orders of magnitude the greatest information mechanism ever invented.  In a few years, we’ll look back in amazement that in 2011 we still used brokers to help us find houses, that doctors kept records scribbled on notepads, that government information was carefully spoon-fed to a compliant press corps, and that scarcity of information and tools was a primary inhibitor to education.

I think within a few years we will also look back in amazement that we paid each month for a bundled package of TV programming, most of which we didn't watch, and that we were not given the flexibility to pay for what we want, when we want it and on the device we want to watch it on.

And that is what my week with Google TV brought to light.

As indicated in an earlier post, I am a relatively light television viewer, so total viewing for the week only added up to 10 hours or so.

Here is a sampling of what I watched:

I watched in a similar pattern as I do on cable - sometimes just surfing around, other times having a clear idea of what I wanted.

My experience was completely different from the 5 families featured in a well-publicized cord cutting experiment who, according to this article, all reacted negatively, "feeling immediately the absence of the constant flow of automated TV choice."

I found the less-passive viewing experience, expanded choices and on-demand availability of everything I wanted extremely appealing.  I was also surprised by the abundance of great content that exists outside the cable hegemony.  The Onion News Network is funnier than almost everything on Comedy Central (The Daily Show and Colbert Report aside).  Timescast gave me enlightening, timely, restrained news coverage - something that is quite difficult to find these days on the cable news networks.  And Amazon, Netflix and YouTube's programming offerings are becoming more compelling by the minute.

Cord cutters like me represent a sliver of television viewers, despite all the press attention.

The television industry has been to date the least flat-footed player in the traditional media landscape, focusing every possible resource on avoiding the fate of the music and newspaper industries. NBC led the development of what is now the second largest online video destination and cable operators have been quite effective at adding broadband, phone and even mobile services to their offering.  (Notice that cable programming represents only half my monthly bill.)

And cable networks are investing heavily in original programming and the highest profile sports franchises, the key stuff that is either not available at all to chord cutters, or available months after the premiere.  (I was able to watch Season 4 of 30 Rock via Netflix, but not the current season. )

Many cable nets are also proving to be particularly nimble at extending their brands to digital platforms - MSNBC had 158 million video views in January, making it one of the most viewed video destinations on the web; and ESPN is consistently one of the strongest brands on mobile devices.

Two recent developments reinforce this sense of adaptability:  Time Warner Cable started offering  lower cost, more customized bundles in certain markets and a new set top box from Cisco that includes web access, among other features, will be soon be available to cable customers from their cable companies.

From an article in the Wall Street Journal announcing Cisco's plans:


IDC analyst Jonathan Gaw said Cisco has an advantage... because consumers would rather lease one device from their cable operator for Web video and cable programming than buy or lease devices from multiple vendors.

And just yesterday, Time Warner (the entertainment company, not the cable company) and Comcast announced an agreement that provides Comcast subscribers with expanded online access to TV content from TBS, TNT, Cartoon and a host of other Time Warner networks.

The title of the blog post I referenced earlier is: "Predicting The Future Of The Internet is Easy: Anything It Hasn't Dramatically Transformed, It Will."

It's just taking a bit longer to transform some of the biggest industries.

Television, the biggest and most influential media form, is at the center of an epic battle for control by many of the most powerful and innovative companies in the world.

Over the next couple of years there will be a steady stream of startling developments that transform every aspect of television viewing - from how we discover and decide what to watch, to how programs are produced, distributed and monetized.
Posted by Jan Renner at 7:23 AM