Moving Fast, Testing and Being Clever

I was just reminiscing with a friend about a technology platform we developed 10 years ago called Streetbeam.  If you lived in NY, San Francisco, or London at the time, there is a good chance you saw one of Streebeam’s “beaming” outdoor media displays. Phone Kiosks, Bus Shelters and Subway signs were deployed with infrared hardware that enabled consumers to point their Palm Pilots (the hot mobile device at the time) at an advertisement and get more information downloaded on the spot.

There is actually a short flash movie showing the technology in action still posted on a random web site.  The clip was shown at an ADWEEK awards ceremony.

Viacom Outdoor (now CBS Outdoor), one of the largest outdoor media companies in the world, invested in the business and provided distribution. They recognized that emerging technologies could make their static media assets interactive and provide greater value to advertisers.

Streetbeam was an immediate hit. Banana Republic, Warner Bros, HSBC and American Express were among the A-list marketers that developed campaigns, using the technology to offer consumers the opportunity to download everything from coupons, store locations, and games. Simon and Schuster, for the release of a new Stephen King book, offered a sneak peak at one of the stories. Stuart Elliot wrote about the campaign in The New York Times.

Some applications were more popular than others, but in every instance, a forward thinking marketer pulled their creative and media team together and identified a compelling way to extend their brand into this new media stream (or beam.)

The budgets were small, as was the media reach, but it taught marketers how important it was to be able to react quickly to new technologies and media platforms and test them out.

We see the same responsiveness from many marketers today as they develop applications for the iPhone. The best of the lot are just plain clever and imaginatively deliver user value and sales opportunities.

My favorite is the Ben Color Capture App from Benjamin Moore. Take a picture of anything and it identifies a Benjamin Moore paint color to match. Using the iPhone's GPS it then locates the nearest Benjamin Moore retailer.  You can see a demo here.

Why do some media companies and marketers seem to move so much quicker than others?
Posted by Jan Renner at 2:19 PM

We have gotten used to seeing TV screens just about everywhere - taxis, airplanes, airports, sides of buildings, stores, gas stations, elevators, etc. Seems the media industry has been on a tireless mission (“No Screen Left Behind?”) to place screens in so many places that we are never more than just a few feet away from our next video exposure.

Considering the amount of video we already view on our computers and phones, is it now possible, with an extraordinarily well crafted media plan, for an advertiser to reach someone every step of their way throughout the day? In essence, follow them?

Here is a list of places, in chronological order, where a video screen flashed an ad message at me during a 5-hour journey from my office in NYC to a hotel room in Detroit:

Certainly a big job to research, plan and buy all these media outlets, but not very difficult.

Coming home from my trip I arrived at LaGuardia and hopped in one of the few cabs in NYC without a video screen. I enjoyed a few video-free moments until I noticed something floating high above the nearby National Tennis Center where the US Open Tennis Championships were in full swing. Hanging from the side of the DIRECTV blimp and filling the night sky with TV programming and ad messages was the largest HD TV screen in the world. 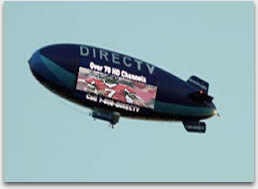 An influential media executive once said that "the future belongs to those brands who are able to travel wherever the consumer is moving."
Posted by Jan Renner at 11:32 AM

MTV received a fair amount of press last month from a study they commissioned to identify the most effective ad format for short form online video. The 5-second pre-roll combined with a 10-second lower third overlay was officially declared not only most effective, but most consumer-friendly as well.

Reading about the study, I immediately recalled a terrific guest column in Online Media Daily titled “Beyond Advertising, A Strategic Path to the Digital Consumer.”  The columnists, both partners at IBM Global Business Services, argue that every contact an advertiser makes with a consumer in a digital environment should impact the brand as well as drive an action - direct response and brand advertising should always be wrapped together.

“Traditional boundaries are fading, creating opportunities for innovative business models for content platforms. Thus advertisers that previously focused on delivering either ROI-driven marketing or brand-oriented advertising can cater to both sets of objectives. The result is what we call "brands-actional" advertising.”

What better way to accomplish this than an online video campaign with a brand oriented pre-roll and a follow up call to action in the overlay?

As online video providers frantically look for ways to effectively monetize their fast-growing traffic and finally move closer to some industry standards, it appears they could find themselves center stage for a new ad model that is embraced by the industry and fundamentally changes outdated marketing practices.

Marketers and their agencies need to move quickly to seamlessly connect their traditional/digital and brand/direct response efforts. Surprisingly most agencies still do not create a short, pre-roll version of their standard 30-second TV commercials.

And shouldn’t overlays and other call-to-action ad units (hot spotting, post roll, etc) be part of a unified and integrated TV creative and media plan? After all, TV and online video viewing are coalescing.

Seems this is just one more example of the immediate need for marketers to centralize multiple disciplines that still often exist in different silos and often different agencies. At the recent Chicago Ad Tech Conference many of the CMOs in attendance were outspoken in their preference for bundled, do-it-all approaches.
Posted by Jan Renner at 9:54 AM